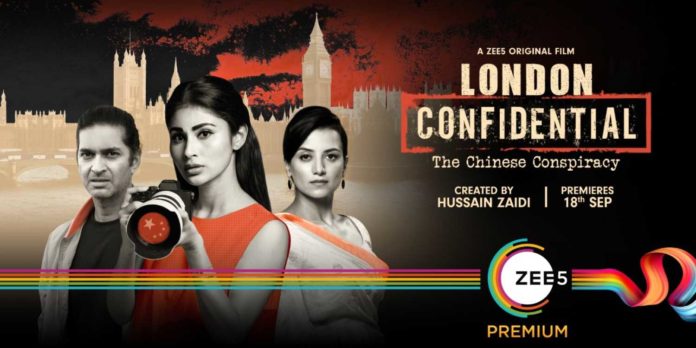 Star Cast, and Crew of the Movie:

The Debut Of Mouni Roy

With the nationwide COVID-19 pandemic, there are several industries, which have faced hurdles in the path of doing business and earnings, which also includes the Entertainment industry. Although the theatres have been shut down, many movies and web series are coming now and then on the digital platform. Recently, actor Mouni Roy made her digital debut with the spy thriller web series London Confidential in which she is playing the role of a RAW agent. In a recent interview, the actor revealed a few things about her latest film

Major Focus of the Movie

The film is based on a concept by tireless conspiracy thriller churner S Hussain Zaidi. Written by Akshay Singh and Prateek Payodhi and directed by Kanwal Sethi, London Confidential doesn’t indulge in much Chinese-bashing. The focus of the movie is on sending Uma and Arjun on a wild-goose chase before they stumble upon the truth that is staring them in the face.

The Story of the London Confidential: The Chinese Conspiracy

In the London Confidential, India is under threat from a “Chinese virus”. Whether the Zee5 original film means the canker that originated in bats and pangolins or a metaphorical threat along the country’s border is left to the imagination. Anyway, a Research and Analysis Wing agent has been killed trying to convey this information to his side. He manages to send a vital clue to his boss Uma (Mouni Roy), but she sits on it until some minutes before the end credits.

What is the Conspiracy in the Movie?

Mouni Roy and Purab Kohli are playing the two main R&AW agents who covertly work in London. The duo is investigating a viral outbreak and thinks that Chinese spies are somehow involved in this Biological attack. However, China is not their only enemy, as a double agent is also working against them and is killing other R&AW agents from within their ranks. Apart from Mouni and Pura, there are several other prominent supporting actors in the movie showing their outstanding performance.

Mouni Roy the starrer of London Confidential is helmed by Kanwal Sethi and is produced by Mohit Chhabra and Ajay Rai under the banner of Jar Pictures. The music for the film is provided by Sanket Naik. As of now, the new movie has mostly received positive reviews. Most fans and critics seem to enjoy her new espionage thriller.

What Do You See There In The Teaser?

The teaser of the movie opens with one of the agents Biren (Kohli) being tortured by Chinese officials who want information about his source in a Chinese delegation. His team is seen worried about his capture as only he knew about the person. There is also talk about a conference, following which a virus will destroy every city it hits.

A Marvelous Fact About the Movie

Interestingly, this is the first OTT feature film to be shot in London post the lockdown. Created by Hussain Zaidi, author of classics like Dongri to Dubai and Black Friday, London Confidential tackles a Chinese virus that is much deadlier than COVID-19. Set in London, post the coronavirus pandemic, there’s a rumor going rife about another deadly virus spreading on the borders of China and India with the Chinese Communist Party’s active involvement. Undercover agent Biren Ghosh is able to establish contact with a Chinese source while also prepared to show incriminating evidence against China at the Conference of New Viruses.

In the same week, when the film was being streamed on Zee5, the TamilRockers, a disreputable online torrent and streaming site, hacked the movie and offered it on their online streaming portal. You are but recommended to watch the movie on its legal, and official channel.

With such an intriguing storyline that is relevant to today’s situation, London Confidential will indeed be an interesting must-watch to see how the Indian agents are able to save the world from another deadly virus, especially after the repercussions of COVID-19 which continues months later. Whether they are successful or not, we’ll have to wait and watch!