The central government has taken a big decision amidst India-China tension. The government has decided to ban 59 Chinese apps. The banned app also includes the famous Tik Tok Ban.

Apart from this, there are many more popular apps like UC Browser, Cam Scanner. Earlier, Indian security agencies had prepared a list of Chinese apps and appealed to the central government to ban them or people should be asked to immediately remove them from their mobiles. The reasoning behind this was that China could hack Indian data.

There is a tense situation between India and China. The armies of both countries stand face to face. Meanwhile, India has taken this big step and made it clear that India will not bow down at any level. The central government has banned 59 apps. Some of these apps are such that you will find them easily in every mobile. 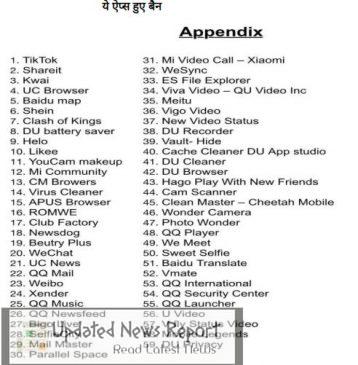 According to information received from sources, the Ministry of Information Technology was receiving many complaints. These apps were a deadly attack on Indian collateral, security and integrity.

China could have manipulated Indian data with the help of these apps. Indian intelligence agencies had already prepared and submitted a list of these apps to the government.

After this, the government took information of these apps at their level and when they felt that these apps could really dent Indian security, then decided to ban them immediately.