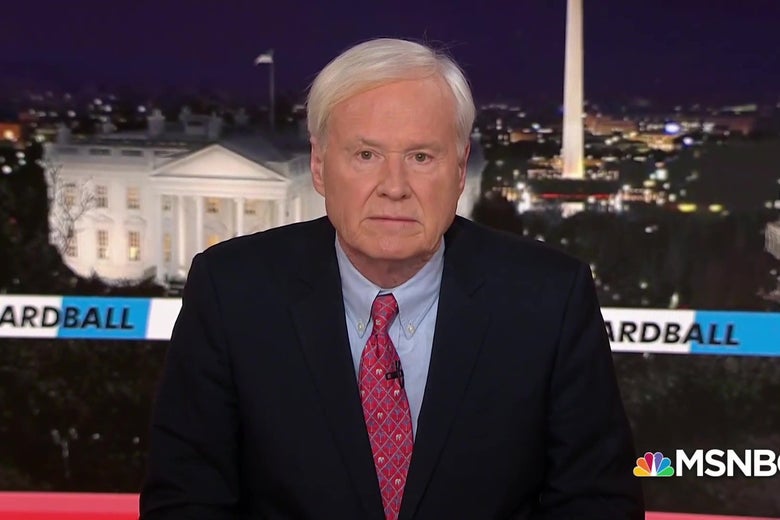 Chris Matthews apparently just quit “Hardball With Chris Matthews” live on air. The abrupt exit of the MSNBC anchor happened after columnist Laura Bassett accused Matthews of sexually harassing her in 2016, and after a terse exchange with presidential candidate Elizabeth Warren about believing women in workplace disputes.

“Compliments on a woman’s appearance that some men, including me, might have once incorrectly thought were okay, were never okay,” Matthews said. “Not then, and certainly not today. And for making such comments on the past, I’m sorry.”

“That was a lot to take in just now, I’m sure,” said a surprised-looking Steve Kornacki, in response to Matthews’ on-air resignation. “I’m sure you’re still absorbing that and I am too.”

The anchor had been planning retirement already, but missteps over the last few weeks sped up his departure, The Wall Street Journal reported. A series of anchors will take on “Hardball With Chris Matthews” until the network figures out a permanent solution for the time slot.

In a GQ story, Bassett wrote that Matthews wanted to know why he hadn’t “fallen in love” with her — right before she went on his show. (She was scheduled to discuss allegations of sexual abuse against Donald Trump.) Though Bassett wrote that she didn’t think the remarks rose to the level of “illegal sexual harassment,” she felt that they undermined her right before she went on-air.

The confrontation with Warren came after Warren had pressed presidential candidate Mike Bloomberg on the use of NDAs at his business. A lawsuit alleged that, upon hearing of her pregnancy, Bloomberg had told a female employee to “kill it.” (Bloomberg has denied saying this.) Matthews asked Warren if she believed that Bloomberg had said this. “Well, a pregnant employee sure said that he did,” Warren responded. “Why shouldn’t I believe her?”

“You believe he is lying?” Matthews asked, referring to Bloomberg. Warren said she did. “Why would he lie? Just to protect himself?”

Also, after Bernie Sanders won the Nevada caucuses, Matthews compared Sanders’ victory to the fall of France to the Nazis in World War II. Sanders is Jewish; many of his relatives on his father’s side of the family were killed in the Holocaust. Matthews later apologized.